This award recognises the importance of medication within the care pathway in diabetes, and the need to ensure that medicines are used safely and effectively. 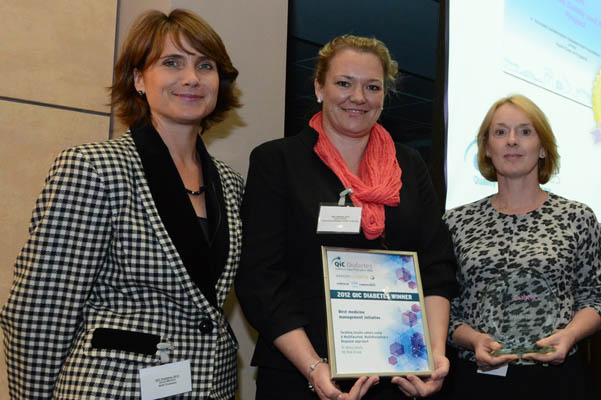 The Regional Insulin safety and Knowledge project (RISK) aimed to identify and implement strategies to reduce insulin errors and improve the care of people with diabetes on insulin across North East England using a common approach to reduce errors linked to unfamiliarity with insulin charts and prescribing practices within each trust. This included an educational poster highlighting a standard way of communicating insulin prescription, a regional inpatient insulin prescription chart, an insulin passport and patient information leaflet and education package for hospital staff. National inpatient audit data in 2012 will be used to see if there has been a reduction in insulin errors.

"A Truly outstanding, collaborative initiative with the NHS, industry insulin manufacturers and NHS diabetes all working together. This initiative has used the learning outcomes to prove that consensus can be reached through collaboration."

Can online structured education for people with Type 1 Diabetes improve glycaemic control and quality of life?

Imperial College Healthcare NHS Trust aimed to combine both group and online elements as part of a shorter, less resource intensive educational model of type 1 diabetes structured education. To achieve this, the Trust implemented a course that consisted of one half day group session, followed by the completion of an online programme, and then a final half day group session two weeks after the initial one. Within this period, patients had access to support from a dietitian and diabetes specialist nurse via email, phone or face-to-face meeting. The course syllabus was provided by the Bournemouth Diabetes Education Centre (BDEC) online website. HbA1c fell significantly to a mean of 8.0 per cent at three months, while scores reported in the PAID (Problem Areas in Diabetes) questionnaire significantly reduced by six months. During the year prior to the course, 17 episodes of severe hypoglycaemia were reported in its participants. At three months into the course, five episodes had occurred but no further episodes were reported at six months.

A collaborative project between the Diabetes Specialist Nursing Service and the Podiatry Service of Solent NHS Trust: Improving the health outcomes for people with diabetes who attend the Community Foot Ulcer Clinic in Southampton

Diabetes leads to 100 amputations a week nationally, of which around 80 are potentially preventable. This project aimed to address this issue through a collaboration between diabetes specialist nurses and podiatrists at the community foot ulcer clinic. This involved targeted DSN input for patients attending the clinic who had active or healed foot ulceration and a blood sugar level (HbA1C) of greater than 9 per cent. DSNs aimed to improve patient knowledge regarding diabetes and foot care, and could facilitate early patient access to a diabetes consultant if necessary. General diabetes knowledge and competence of podiatrists was also developed. A six month report is already demonstrating favourable outcomes with obvious improvement in HbA1C blood levels, some changed behaviours of some patients and carers and improved confidence of the podiatrists.