Prince Charles Hospital in Wales is in an area of marked social deprivation, but the paediatric unit has recorded some of the best outcomes on the National Paediatric Diabetes Audit for England and Wales for several years. Following critical feedback from young people moving to adult services, the paediatric team engaged their colleagues in adult services to address issues that led to disengagement and deterioration in outcomes. This process began in 2016 and, within a year, NHS Wales hailed the model was hailed as an example of good practice. Evaluation and changes were accomplished through reconfiguration of existing work patterns and without additional costs.

Feedback from questionnaires sent to 57 YP who had moved into adult services in the preceding five years, and their parents, recorded an overwhelmingly negative opinion about services. The survey also asked respondents what they would like from the service. The adult and paediatric diabetes teams worked with the NHS Wales Transitional Care Co-ordinator to review the issues with the service structure and identify changes that could be made. In January 2017, the first cohort of patients used the new-style clinics. The patients were all aged 16 and were seen in the paediatric centre. The clinic was led by the PDSN with an adult DSN and paediatric dietitian in attendance. The patients were invited to three nurse-led sessions throughout the year in which they turned 16. Leading up to their 17th birthdays, they received invitations to attend a clinic with the consultants, led by a paediatrician but with the adult consultant present, alongside the adult DSN, PDSN and adult dietitian. At age 17 the patients were invited to attend two further nurse-led clinics held in the adult diabetes centre, led by the DSN with the PDSN and adult dietitian present.

At age 18, the patients attended a second consultant-led clinic, this time led by the adult consultant, with the paediatrician, adult DSN, PDSN and adult dietitian present. At that point, pending agreement within the team and with the young person, the patient was handed over to adult services. Important elements of the new approach include: educating YP about what will happen next; providing contact details for adult services; outlining available Structured Education options, as well as giving families information about the service changes, including a ‘who’s who’. The location of the clinics was also changed, with the DSN and dietitian from adult services moving their clinics to community hospitals in between consultantled appointments. This made attendance easier for patients. The geographical composition of the region can make it difficult to travel from one valley to another, especially if a person relies on public transport. Bringing the team out of the District General Hospital into community hospitals made services much more accessible.

Pre-existing clinics were converted into transition clinics, so there was no increase in workload for most of the nurses and dietitians. The number of clinics attended by the DSN in adult services has risen, but this has been compensated for by reconfiguring other work. The change in clinic structure has also meant a small increase in consultant time, with an additional four sessions needed per year.

Over 25% of respondents to the survey, who had moved to adult services prior to the changes, indicated that they had not attended a follow-up appointment in the adult services clinic. Of the patient cohort who completed the two-year programme, there was 74% attendance at all transition clinic appointments and all patients attended at least three appointments within the two years. Survey responses from the first cohort of young people to move through the new process indicate substantial improvements in preparedness and patient contentment with the process.

The changes made to the service have been highlighted as good practice in Wales, with early changes recognised in the All Wales Standard document. This publication was highly commended at the QiC awards 2019. The good practice standard set by Prince Charles Hospital is now being replicated in other areas of Wales. Units in in both North and South Wales are adopting similar models of care for this age group and creating their own meet-the-team boards. Ideas from the team helped inspire some of the content of Diabetes UK’s ‘How to: Improve transition for young people with diabetes’, published in 2017, and its ‘diabetes monthly hacks’. In 2018, the team presented a poster at the Cwm Taf Morgannwg Research and Development Conference. In January 2019, the team presented the service changes at the RCPCH NPDA conference. 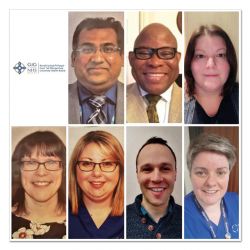