Hypo Dino – created by children to inspire others

Hypo Dino is a picture book created by a girl of eight called Katie, who has type 1 diabetes. The hero of the story is Tim Dinosaurus, a dinosaur with type 1 diabetes and a spy protecting the world from an evil villain. Tim experiences hypos and has to learn to manage his diabetes in order to save the world. Katie brought the book to a clinic appointment at Morriston Hospital (Swansea) and the Children and Young People’s Wales Diabetes Network worked with a graphic designer to recreate it as a printed resource that is distributed to families across Wales through paediatric diabetes units.

Hypo Dino was entirely the creation of Katie and her friend Ava. The Network decided to publish it after recognising that it could be used as a means of support for families across Wales. After the publication decision was made, the design, print and distribution of the Hypo Dino book was project managed by the Network Manager. The team ensured that Katie and her parents gave full consent for every decision taken. They were careful to ensure that Katie did not feel pressured, overwhelmed or stressed by any of the process. The first meeting was facilitated by the psychologist in the team who ensured Katie was satisfied with the decisions that were being made. The Network licensed the publication from the creators, Katia and Ava, ensuring that the intellectual property rights remained with them. The Network commissioned Matthew Pugh, a graphic designer based in Swansea, who had worked for the Network before. Matthew met with Katie and Ava and their families and resolved some style and design issues so that the picture book could be printed in a normal way. This included redrawing some of the artwork and correcting some spelling. The narrative structure was retained entirely. The Network Manager suggested the inclusion of some questions for readers at the end, which the creators approved. The book was printed and officially launched in November 2019, nine months after the initial meeting with the Network Manager. Quantities of the book were distributed to teams around Wales, who were encouraged to give it to all families attending clinics where the child was aged between six and ten. The initial print run was exhausted by January 2020 and a second print run organised, this time in a bilingual format featuring a Welsh translation of the story. This was distributed direct to paediatric units in April 2020.

The project was completed in a timely and effective manner, with resources distributed to all teams in Wales to ensure maximum availability of the resource. Staff fed back that Hypo Dino has helped them to have conversations with children and parents about hypos, reducing anxiety, and normalising diabetes as part of life. Healthcare professionals reported that they found it a helpful, friendly, unthreatening resource. It has been recognised by the All-Wales Patient Reference Group and the Diabetes UK Cymru Wales Advisory Council as an example of excellent engagement by a healthcare organisation working with people with diabetes. The Network has also been commended by the All-Wales Diabetes Implementation Group and the National Service Advisory Group for Diabetes.

A second print run of Hypo Dino has been budgeted and paid for, and this should provide enough copies to supply the target audience in Wales for at least three years. Hypo Dino can be licensed for use in any territories and one of the regional CYP Diabetes Network managers in England has indicated an interest in publishing this book in partnership with a grant-making body 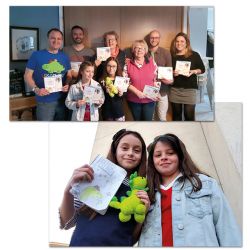