Management of Diabetic Ketoacidosis (DKA) remains a significant clinical problem in hospitals. Morbidity, mortality and length of hospital stay are negatively affected unless this life-threatening condition is diagnosed and treated quickly. The Sandwell and West Birmingham (SWB) NHS Trust’s junior doctors and nursing staff found the Joint British Diabetes Society (JBDS) guidelines on DKA too lengthy and complicated, resulting in poor adherence. In August 2015, the document was abbreviated from ten to two pages. Audit in 2015-16 showed significant improvements in adherence, management outcomes, user satisfaction and length of stay and the revised protocol became standard in the Trust. Re-audit in 2018 showed it remained effective and widely utilised.

The simple, inexpensive idea of redesigning a complicated and lengthy national DKA protocol into a user-friendly one solved a previous long-standing problem. The brevity of the 2-page document, incorporating the JBDS protocol, works at a practical level, making it universally acceptable and utilised by junior doctors. It has improved patient safety, reducing DKA management errors and chances of a ‘never event’, the DKA management structure is easy to follow and junior doctors and nursing staff are happy. Junior doctor education has been improved, bringing confidence in DKA management and reducing morbidity, mortality and length of hospital stay. Early specialist referrals to the Think Glucose diabetes specialist team reduce length of stay, improving hospital capacity, better throughput and cost savings, while providing a better patient experience.

SWB NHS Trust is a large NHS teaching hospital with 850 beds and 38,000 admissions each year. A third of admitted patients have diabetes and 20-30% of these are insulin treated. National JBDS DKA guidance is a 10-page document, which is seldom followed in real life by junior doctors because of lack of time and the length of the document. In August 2015, following lengthy consultation with key stakeholders and an initial pilot, the document was abbreviated to two pages. A retrospective review of DKA admissions (May 2015-August 2016) using the new guideline (introduced August 2015) covered DKA diagnostic criteria, investigations, management, resolution, timeline and discharge planning during DKA admission. The patient journey was mapped before and after the implementation of the new protocol. Audit showed significant improvement in adherence and management and the protocol has been used in the hospital since 2016. Consecutive DKA-associated admissions in 2018 were reviewed, including usage of diagnostic criteria, time to diagnosis, insulin/fluid management, monitoring, length of stay, resolution of DKA and appropriate specialist referral. Comparison was made with the national audit (2014) and from 2015 post-introduction of the new protocol.

In 2015-2016, out of 55 DKA admissions, 33 (60%) were reviewed (14 cases May-July 2015 and 19 cases August 2015-August 2016). Results were compared before and after introduction of the new chart in August 2015. Before August 2015, four out of 14 patients (28%) with DKA admission had no basal insulin given along with DKA protocol and 25% did not have 10% dextrose infusion started when blood glucose fell below 10 mmol (hypoglycaemia). Close to 50% of doctors did not complete the old, 10-page protocol. After August 2015, there was a 23% improvement in basal insulin continuation rate and 29% improvements in switching to 10% dextrose infusion when blood glucose dropped below 10 mmol. These improvements resulted in earlier resolution of DKA and significantly reduced hypoglycaemia incidence. Improved uptake of this new protocol, widespread communication and medical/nursing staff education and upskilling resulted in in quicker and earlier referral to the in-house Think Glucose team and therefore better overall clinical care and safe management of DKA. Mean admission to DKA diagnosis time fell by 58 min (135 to 77 min), admission to initiation of fixed-rate intravenous insulin infusion time fell by 105 min (177 to 71 min), admission to initiation of IV normal saline time fell by 18 min (93 to 75 min) and time to resolution of DKA improved by one hour 10 min (16.9 to 15.8 hours). DKA patients’ length of stay improved by a mean 4.3 days, suggesting not only better, but more effective, clinical management, resulting in less risk of hospital-acquired infections, improved patient experience and overall cost savings. Junior doctors were surveyed and 20/26 (77%) found the new protocol helpful, 16/25 (64%) found it easier to use and 17/25 (68%) found that it made DKA management easier. In 2018-2019, 49/72 patients coded as DKA were reviewed. According to JBDS guidelines, 94% had the correct diagnosis of DKA made (nationally 71%), 100% were given fixed-rate insulin infusion (FRII) and normal saline (nationally 91% and 96%, respectively). Appropriate blood tests were done in 100% (nationally 69%). A total of 20/49 (41%) needed an ITU review and 5/49 (10%) needed an ITU stay. 47/49 (96%) were appropriately treated in a monitored unit. As per protocol, basal insulin was continued in 13/21(62%) patients (nationally 58%), 10% dextrose was started when BM <14 mmol in 48/49 (98%) patients (nationally 82%), DKA resolution was confirmed in 47/49 (96%) and 35/49 (71%) patients were referred to diabetes for review (nationally 14%). Admission to diagnosis time, use of insulin and normal saline were 65, 85 and 61 minutes, respectively (compared to 77, 72 and 75 minutes, respectively, in 2015). Time to resolution and discharge was 21 hours and 5.6 days, respectively (compared to 16 hours and 3.3 days, respectively, in 2015). While figures are generally better, there is still room for improvement.

The abbreviated guideline has become standard practice in the hospital and its benefits communicated nationwide. It has been endorsed by four national societies and downloaded 1,000 times. Many other Trusts in the country having adopted it. Simple targeted strategies have been used in the in-patient safety programmes, which should be easily sustainable as the processes and protocols are not complex and are easy to set up and follow. 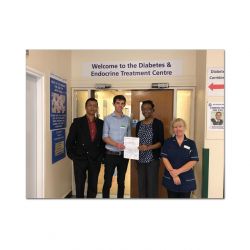