Insulin education for all: A pop-up online resource

The free online course ‘Understanding Insulin’ was developed to benefit insulin users worldwide. There was a need to improve insulin knowledge among healthcare professionals (HCPs), people with diabetes and their carers. Insulin-related errors are common both in the UK and internationally, increasing the risk of adverse complications and poor health outcomes. In the National Diabetes Audit, 49% of patients on insulin had experienced an insulin-related error. Many HCPs across the healthcare professions are not competent with using and managing insulin. There are also gaps in insulin knowledge for people with diabetes and their carers.

A Massive Open Online Course (MOOC) development proposal was submitted to the University and approved. Development comprised a content discovery stage to evaluate what should be included to provide clear and comprehensive education. This involved broad discussions and in-depth mapping of content. The design of content structure, access (navigation) and style were planned to ensure good usability and effective learning. Interactive, multimedia enhanced content was generated, including storytelling via characterised comic book graphics, videos, diagrams, quizzes and articles. Links to external resources were identified. Beta-testing by colleagues and medical students resulted in improvements. The delivery team then identified and trained mentors, organised MOOC content reviews and oversaw improvements to the content and design features.

A four-week, free MOOC was delivered via the FutureLearn educational platform. It now runs twice a year, for HCPs as well as for people with diabetes and their carers. It covers physiology, clinical applications of insulin, pharmacology of preparations and practical considerations and has had a global uptake. A variety of innovative learning design strategies engage learners of all levels and facilitate active learning. Medical student mentors encourage appropriate discussion and peer learning. A total of 8,882 people enrolled in the MOOC during the four runs analysed. Learners were categorised into two groups: HCPs (54%) and social learners (learning for personal or casual purposes, including people with diabetes and carers). The HCPs were multidisciplinary, both between and within their professions, including 63% nurses, 14% doctors, and 22% allied HCP workers. There was a broad spread of ages (13% were 18-25 years old, 34% were 26-45, 38% were 46-65, and 17% were over 65). Approximately two-thirds of learners were female. The MOOC was undertaken by learners around the globe from 163 countries. The top countries for learners were the UK (49%), Australia (5%) and the US (4%). However, there were a number of learners from under-resourced countries, such as Pakistan, Nigeria, Ethiopia, Somalia, Afghanistan, and Myanmar, where training/learning opportunities could be less prevalent and accessible. More than half of the learners completed at least one step of the course per week, which suggests that they remained engaged. A fifth of users completed the entire course. This completion rate is high in comparison with the average completion rate of MOOC, which is below 7%. After the course, learners were asked how confident they were in applying knowledge taught in the course. A total of 78% were ‘very confident’, 19% ‘a little confident’ and below 1% were ‘not confident’. This suggests that the MOOC has improved confidence in HCPs. A total of 96% agreed that they had learned new skills from the course, 95% agreed that the course had positively impacted their work,and 97% agreed that they had subsequently improved their practice. Some gained new knowledge and for others it was an opportunity to revise knowledge.Learners with both type 1 and type 2 diabetes on insulin, those anticipating a move to insulin in the future and those supporting/caring for individuals with diabetes reported benefits from taking the MOOC, including improved confidence in applying their knowledge and sharing it with other people.

To ensure the wider sustainability of the MOOC, it has been used by the University of Southampton’s HCP students, both through the MSc Diabetes Best Practice programme and by undergraduate medical students, as well as by students taking other programmes offered at the University. The University plans to continue offering it. Content reviews will be facilitated by the MOOC delivery team, including a Consultant Diabetologist, to ensure it remains current. It is hoped that this MOOC can be adopted more broadly in the NHS and the developers believe it would be well received, especially as it is a digital resource, presented to maximise online learning appeal, which has great benefits in the current climate. The Faculty of Medicine, University of Southampton, is currently developing other MOOCs in different healthcare areas. The development process for this MOOC and the feedback from learners have played, and are playing, a critical role in initiating and shaping new healthcare MOOC development. 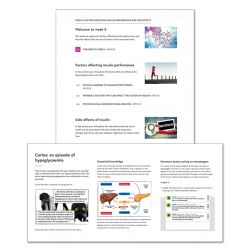