In the 2014-15 National Paediatric Diabetes Audit (NPDA), the unit was one of the top 10 in the UK, with 38.4% of patients achieving an HbA1c <58 mmol/mol (national average = 22.0%) and a mean HbA1c for the clinic population of 62.8 mmol/mol (national average = 70.6 mmol/mol). However, benchmarking against 2016-17 data showed that outcomes were deteriorating when those nationally were improving. An application was made to join the Royal College of Paediatrics and Child Health (RCPCH) National Diabetes Quality Improvement (QI) Initiative Pilot to bring about changes. Outcomes for newly diagnosed patients in the two years since compare favourably to preceding years and other paediatric units.

The unit was selected to participate in the RCPCH QI Initiative Pilot project. This involved the whole team (including administrators, nurses, doctors, dieticians and a psychologist) exploring methodology and techniques to help drive and sustain change over a period of two weekends and two weekdays. As a result, a range of QI initiatives were implemented. The first of these was carbohydrate counting from diagnosis. All patients started from their first meal after admission, with no fixed insulin doses used. All 48 members of ward nursing and ancillary staff were trained by the team to support carbohydrate counting out of hours.

The second initiative was microteaching. A bite-sized teaching topic was chosen by the patient/family from a series of 30 topics (developed from a patient survey), with discussion facilitated by an educator in the waiting room before each clinic appointment. Furthermore, team targets were set to ensure the whole team gave the same advice and inconsistency was eliminated e.g. for blood glucose levels pre and post meal, at bedtime etc. The final initiative was to encourage families to use Diasend downloading at home.Families that took an active role in interpreting their own data enhanced self-management skills. This approach was also intended to help lead into the next project: telephone clinics. The agreed QI aim is to achieve an HBA1c of 48 mmol/mol at three and 12 months from diagnosis. The progress of each of these projects is continually monitored with selected metrics displayed at fortnightly team meetings on run charts.

In the two years between going ‘live’ with carbohydrate counting from diagnosis (December 2017 to December 2019), 51 children with newly diagnosed Type 1 Diabetes were admitted. In order to maintain a tight focus on blood glucose control, run charts monitor average glucose at seven, and 30, days post diagnosis, and HbA1c at three, six, and 12 months post diagnosis. In the year prior to the QI programme, average blood glucose was 12.6 mmol at seven days and 7.5 mmol at 30 days. This has now fallen to 10.0 mmol and 6.6 mmol, respectively. The number of blood tests patients undertake has increased from 7.2 to 9.0 tests daily. Mean HbA1c at three months has fallen from 51.2 mmol/mol to 46.8 mmol/mol and, at six months, from 54.9 mmol/mol to 50.1 mmol/mol. At 12 months post diagnosis 45% of the newly diagnosed QI cohort of patients have an HbA1c in the normal range for a non-diabetic child [<48 mmol/mol]. The median HbA1c for the group is 50 mmol/mol.

While the initial focus was on new patients, the impact on the control of these patients and the ripple effect of agreed targets and microteaching on the broader clinic population has been significant. The most recent HbA1c data from the 2018-19 NPDA report suggest that 50% of all patients now achieve an HbA1c <58 mmol/mol, compared to the nadir of 28.6%, and 18.6% achieve an HbA1c <48mmol/mol. This compares to an average of 34.1% <58 mmol/mol and 9.5% <48mmol/mol for the other 20 paediatric centres in Yorkshire and Humber. The clinic median is now 57.3% and the clinic mean HbA1c has fallen from 64.5 to 59.0 mmol/mol.

QI is now an integral part of care delivery and outcomes are evaluated continuously by collecting metrics and examining the data. More than two years on the team still meets every two weeks (albeit virtually at the moment). The success of the initiative has been shared within the organisation via the Hospital Communications Team and presentations to the Trust Board, Division of Medicine, Clinical Summit, Hospital Grand Round and, on request, to other clinical teams seeking inspiration and motivation to embrace QI methodology. The Director of Nursing has ensured that all children and young people are admitted to a single in-patient ward, where staff are now proud to call themselves ‘The Diabetes Ward’ and have embraced being upskilled in Diabetes care by members of the Diabetes Team, in order to facilitate and support the team’s QI work. The results have been shared at local, regional, national and international diabetes and QI meetings. In addition, a plenary talk was given to the 2019 British Society of Paediatric Endocrinology and Diabetes meeting. The team champion has been invited to be the Diabetes Network QI Lead and will support colleagues across Yorkshire and Humber as they embark on their QI journeys. They will advise on projects and the five-year national development plan. Having participated in the pilot, the team now helps others across the country as they join the collaborative. The team champion is now an RCPCH QI Trainer. The support of the RCPCH Quality Programme will lend uniformity of approach and quality assurance to the work being done nationally.

Perhaps the biggest challenge has been maintaining team enthusiasm and commitment when there are conflicting demands on time, but the continual appraisal of data is compelling and the NPDA data serve as an excellent benchmark performance against other teams nationally. While QI is not the only driver of improved outcomes, participation in this initiative provided the impetus to embrace the need for change and be prepared to be brave and fail fast. 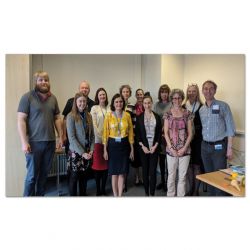