Psycho-education Workshop for Parents of Children with Type 1 Diabetes

The paediatric diabetes healthcare team at the Children’s Hospital for Wales cares for approximately 200 children and young people with type 1 diabetes (T1D), aged from one to 18 years. Young people with T1D are at increased risk of psychological difficulties. Depression, weight and shape concerns, body dissatisfaction, higher BMI, adolescence and gender have been identified as predictors of disordered eating behaviours (DEBs) in individuals with T1D. Additionally, there is a greater incidence and persistence of DEBs in individuals with T1D, perhaps owing to the need for food monitoring and carbohydrate counting. DEB features include poor self-esteem, body image dissatisfaction, fear of gaining weight and purging unwanted calories. Young people with T1D can purge calories by insulin restriction or omission, resulting in glycosuria. T1D and DEBs increase the risk of poor health outcomes, such as poor metabolic control, increased risk of diabetic ketoacidosis and microvascular complications. Diabetes clinicians need be aware of the potential warning signs, plus assessment and treatment options. A pilot psycho-education workshop was designed for parents of children with T1D to raise awareness of DEBs, self-esteem and body image issues in young people and give them tools to support their children/adolescents.

Members of the Paediatric Diabetes Team at the Children’s Hospital for Wales published an article in the British Medical Journal describing how high rates of DEBs, issues with body image and intentional manipulation of insulin for weight loss was reported in the research among young people with diabetes. Girls with T1D with the same BMI as peers without T1D associate with a significantly less positive body image and poorer psychosocial outcomes, including low self-esteem, which may be a precursor to DEBs. Evidence from other areas of high eating disorder prevalence shows that prevention programmes focused on positive body image and anti-restrictive behaviours significantly reduces eating disorders. Families described their children/adolescents as having low self-esteem and concerns over body image due to gaining weight following a diagnosis of T1D and during puberty. These concerns occurred within the context of increasing publicity about DEBs in T1D. Identifying DEBs can be difficult in practice so raising awareness within the multidisciplinary team and families was crucial to ensure open and sensitive conversations about the relationship between psychological well-being, T1D and DEBs. The team convened a psycho-education workshop for parents, to raise awareness of the factors that influence children’s and adolescents’ self-esteem and body image and teach them how to talk about the topics. By supporting families to engage in these conversations, emerging difficulties could be identified and early intervention sought, preventing longer-term negative health and psychological outcomes.

A two-hour evening workshop was convened for 11 families, facilitated by the trainee clinical psychologist who created it, with support from the clinical psychologist, dietitian and youth worker. Group activities were held to help them understand the components of self-esteem and factors associated with body dissatisfaction. Psycho-educational activities aimed to normalise and validate participants’ concerns and facilitate compassionate peer support. Family self-help packs were tested and the importance of parents modelling self-care and using sensitive language to encourage honest conversations around body image and DEBs was discussed. Activities from the packs helped parents to identify body image distortions and explore their feelings related to the body. This prepared them for similar conversations with their children/adolescents. The team participated in all exercises and offered advice on how to talk about sensitive topics. The main message was that people felt dissatisfied with certain parts of their bodies, but it was personality and values that counted. The use of mindfulness as a coping tool for psychological distress was explored, followed by an exercise on compassion. Before leaving, participants were asked to complete feedback forms.

The workshop improved parents’ confidence and knowledge in understanding and talking about self-esteem and body image. The direct impact on children’s self-esteem, body image or DEBs was not measured, but parents who understand the signs and symptoms of psychological distress can better support their children. Research highlights the existence of body dissatisfaction and dieting-like behaviours in preadolescent children and that children’s perception of their mother's level of body dissatisfaction predicts the child’s body dissatisfaction and dieting awareness. Therefore, teaching parents to act as role models, modelling healthy eating and body satisfaction is crucial to prevent children’s low self-esteem, poor body image and DEBs. The results of qualitative feedback from parents suggested that they found the group beneficial. They also suggested ways to improve the workshop, wanting more tips to improve parent self-image and spot low self-esteem. Many asked for ‘more time’ and ‘more mindfulness’, plus a follow-up refresher group. They also said they enjoyed the support of other families whose children had the same disease.

This project is sustainable as it follows the principles of Plan, Do, Study, Act (PDSA) cycles and quality improvement. The model has enabled the team to develop a pilot workshop, based on consultation with families and multidisciplinary clinics and informed by the research literature surrounding T1D, body satisfaction and DEBs. The implementation and evaluation of the pilot workshop demonstrated improvement in parents’ knowledge and competence. The PDSA cycle is a powerful tool for learning from ideas that do and don’t work. Feedback from the pilot will be incorporated in the design of future workshops. This project has enhanced team working and the family self-help activity pack can be shared with many families. The project has ensured that every member of the team provides a consistent care ‘message’ about parents being a role model for body satisfaction, self-care and healthy eating. 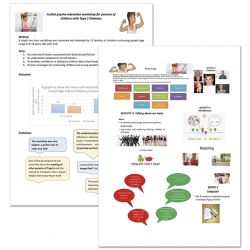