NICE guidance and the Diabetes Delivery Plan for Wales recognise prompt diagnosis of Type 1 diabetes (T1D) in children as a priority. The National Paediatric Diabetes Audit (NPDA) also made recommendations regarding early diagnosis of T1D, to reduce the number of children and young people (CYP) in diabetic ketoacidosis (DKA) at the point of diagnosis (about 25%). Most CYP presenting for the first time with signs of T1D are seen in primary care. However, T1D remains a relatively uncommon diagnosis in this setting and delays can occur. A quality improvement (QI) project was initiated in the Cardiff & Vale University Health Board (CVUHB) with the Children and Young People’s Wales Diabetes Network (CYPWDN). Primary care healthcare professionals (HCPs) outlined the challenges they faced. A clinical referral pathway for the diagnosis of diabetes in CYP in CVUHB was established, backed by teaching programmes and reflective learning.

Research suggests that raising awareness of symptoms of new-onset T1D among HCPs and the public can reduce the rate of DKA at diagnosis in children. In 2017, stakeholders in CVUHB and the CYPWDN, started a scoping exercise to identify the barriers to diagnosing children and young people with T1D in primary care and working on solutions with clinical leads and GPs. The barriers identified included a lack of a clear referral pathway, unwillingness to refer ‘just in case’, plus lack of sustained training to bridge gaps in knowledge, including investigations such as fasting blood glucose or HbA1c, and lack of blood glucose meters. Collaborative working with the Primary Community & Intermediate Care (PCIC) team addressed each problem. The new referral pathway and all aspects of the QI initiative gained Local Medical Committee approval and introduction in January 2018. Correct and incorrect diagnostic procedures were noted and communicated to the primary care team following each new diagnosis. Patient incident report and adverse event reporting forms (Datix) were completed in partnership with the primary care team, with reasons for delay investigated by the PCIC team and reflections by the HCP and change in practice encouraged. Diabetes education has been embedded in the Cardiff Protected Education Teaching (CPET) sessions for HCPs in primary care and Out-of-Hours GP teaching.

Delay in diagnosing CYP with T1D can potentially lead to the life-threatening complication of DKA, which affects approximately 25% of newly-diagnosed children. DKA is the most common cause of death in children with diabetes and carries the risk of long-term morbidity. Previous awareness-raising campaigns in Wales had variable success. This could be due to a lack of sustained change and ongoing training of HCPs, as well as lack of public awareness. The barriers faced by HCPs in primary care were identified and QI initiatives were developed to improve timely diagnosis. This included a referral pathway, feedback tools and training. Two audits were carried out, the first covering 2017, pre-change, and the second post adoption of QI changes in January 2018. Feedback from the primary care teaching sessions was also reviewed.

Before the QI initiative (2017), The Children’s Hospital for Wales had 22 CYP newly-diagnosed with T1D, 19 of whom presented to primary care and four were in DKA; ten had point-of-care (POC) (immediate) testing, finger prick blood glucose (BG) testing and two had a urine test. Three had fasting BG, resulting in delays. Three of the four in DKA had delayed diagnoses. After the QI initiatives (2018), the hospital had 32 CYP newly diagnosed with diabetes, 22 of whom presented to primary care, with six of them in DKA. Seventeen of the 22 had a POC finger prick BG test and three had a urine test. Five of the six in DKA were so at first presentation to primary care, had POC testing and were referred promptly to secondary care. Post QI initiatives, 91% had POC finger prick blood glucose or urine testing and prompt referral to secondary care, compared to 63% pre-change in 2017. This pathway has been well received with more than 160 GPs directly engaged in its rollout in CVUHB. Feedback from the teaching sessions continues to be collected and evaluated. A clear improvement in prompt diagnosis of T1D in CYP has been demonstrated following the QI initiatives between primary and secondary care in the CVUHB. This has a huge impact on CYP and families with T1D as they are seen on the same day of diagnosis by the paediatric diabetic multidisciplinary team and treatment and education can be commenced quickly. DKA at diagnosis of diabetes can be considered as a quality indicator in its own right, as it may reflect the speed with which diabetes is diagnosed by HCPs prior to referral to secondary care. DKA is potentially life-threatening, results in HDU/ITU care and also has a long-term impact on diabetes care. This has a huge financial burden on the NHS and psychological impact on the CYP and their families. This QI project is a low-cost initiative which highlights collaborative working between primary and secondary care. The outcomes benefit both CYP with T1D and NHS costs. A reduced incidence of DKA at diagnosis cannot be demonstrated yet due to the small numbers. However, sustained training for HCPs, continued collaborative partnership working with primary care, reflective learning/incident reporting and continued use of the referral pathway should demonstrate a reduced incidence over time.

The deputy Chief Medical Officer for Wales has recommended that the referral pathway is rolled out across Wales in all the health boards. The QI innovation has been extended across the Children and Young people’s Wales Diabetes Network. Pathway handbooks have been distributed to diabetes teams across Wales. A ‘task and finish’ group has been formed with current stakeholders and includes a public awareness campaign led by diabetes UK Cymru. 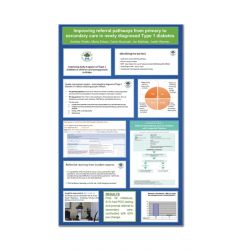