The Evolvement and Expansion of the DICE Programme

In 2015 the Diabetes Inpatient Care and Education (DICE) programme won a QiC award for ‘Best Improvement in Quality of Inpatient Care Initiative’. The programme demonstrated reduced harm to patients with diabetes in Ipswich Hospital after establishing a fully staffed, proactive inpatient diabetes team focused on improving care through staff education, innovation and implementation of new systems of care. The innovative tools included: an admission avoidance service; the DICE Chart (an individualised care pathway); an innovative referral/triage system (the Diabetes Patient At Risk score); use of web-connected blood glucose monitors with hypoglycaemic alerts; strategies to prevent nocturnal hypoglycaemia; a junior doctor induction programme; a foot protection pathway and education of all staff on the new pathways and guidelines. Overall, hypoglycaemic rates (<4.0mmol/l) reduced by 25% but severe hypoglycaemia (<2.2mmol/l) reduced by 46%. Heel ulceration fell more than in the non-diabetes population (56% v 25%). Length of stay fell by approximately one day. A composite of hospital-acquired complications fell 23.0%. This latest submission relates to the expansion of the DICE project, new initiatives to sustain staff engagement, new tools to promote patient empowerment, dissemination of learning to other Trusts and evidence of uptake. Reductions in hypoglycaemia and length of stay have been sustained; a monthly audit continues to drive improvement; the education programme has been expanded Trust-wide; foot champions have been introduced across the hospital and a patient-held ‘perioperative passport’ has been developed. The Ipswich Touch Test is being used internationally (USA, Canada, Australia), while the passport has been requested by over 20 hospital Trusts.

Outcomes data from the initial DICE project was used to put together a proposal for continued funding from Ipswich Hospital and ensured that the project had the continued support of the CEO, Medical Director, Director of Finance and Director of Nursing. The diabetes inpatient specialist nurses (DISN) increased from 2.5 to 3.5 whole time equivalent (WTE) and a project manager joined the team, funded by ‘soft monies’. The DICE team (project manager, pharmacy representative and foot team) continues to meet weekly, with others invited as appropriate. A monthly audit of medication errors, foot checks, insulin infusions, severe hypoglycaemia, diabetic ketoacidosis (DKA) and hyperosmolar hyperglycaemic state (HHS) is used to measure outcomes and launch new programmes, including the foot champion programme and medicine management card. The perioperative passport was introduced to improve the experience of patients with diabetes undergoing elective surgery and to reduce length of stay. After a successful pilot, charity funds were used for expansion, including the recruitment of a perioperative DSN and roll-out of the perioperative and day case booklet.

Interrupted time series analysis shows that the significant decrease in length of stay shown in the original QIC entry was sustained, with a reduction of 1.0 bed day from 2013 to 2016. This is conservatively estimated to have saved around £2 million in the three years since the DICE project commenced.POC downloads and analysis shows that the number of hypoglycaemic events remains below those pre-DICE. A system is being developed to target sustained hyperglycaemia. The impact on knowledge and confidence in treating patients with diabetes was measured before and after targeted training of 128 healthcare assistant (HCA) trainees from May 2016 to July 2017, with mean knowledge scores increasing from 5.07 to 7.88. To sustain the reduction in hospital-acquired foot lesions over 50 HCAs were trained to become foot champions. This has now risen to over 100. After training, 90% rated their knowledge of inpatient foot care as ≥6/10 compared to just 64% of untrained staff, with 98% rating their confidence in assessing the diabetic foot as ≥6/10 compared to 72% of untrained staff. In the National Diabetes Inpatient Audit (NaDIA) 2016 and 2017 almost 90% of patients received a foot assessment.The perioperative passport was piloted in 50 patients with diabetes undergoing elective surgery. Compared with an equivalent group who did not receive the passport they reported that the information given was significantly more helpful. Mean length of stay was shorter in the passport group (4.4 vs 6.5 days).

The Trust funded the DISN team for two years, to prove benefit. Detailed audits demonstrated reduced foot ulceration, medication errors, length of stay and hypoglycaemia. With positive feedback from other clinicians, the business case for permanent funding was straightforward. Charity funds have been used subsequently to employ a 0.5 WTE perioperative DISN and project manager to support the new perioperative initiative. A bimonthly project group has been created to bring together colleagues from diabetes and surgery to share learning and experience. Education sessions have been integrated across the Trust, from HCA training to junior doctor training. A quarter of hospitals still do not have DISNs so DICE experience is being used to support the case for investing in DISNs and web-connected glucose monitors nationally. Initiatives from DICE have been presented at national conferences.Poole, Leicester and East Kent are using the project’s evidence-based initiatives, saving them time and resources. Teams from several hospitals have shadowed the DICE team at Ipswich. The education programme at Ipswich Hospital has expanded to include training of HCAs, international nurses, student nurses, FY1/FY2 and CMT trainees, plus regular training in ED . A Foot Champion training programme was developed and delivered mainly to HCAs, who are ideal to lead on this, being a relatively static workforce. On completion they become Foot Champions, educating others in basic foot examination, foot protection of those at risk, and the referral process to the multidisciplinary team. The programme has been successfully evaluated and the results presented at national conferences. The perioperative passport innovation has forged links with previously ‘hard-to-reach’ surgical and anaesthetic colleagues who have agreed to continue funding this, and the perioperative diabetes surgical nurse, if the project proves successful. 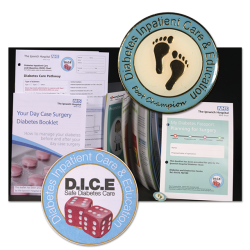