Inspired by patient feedback about limited access to resources after their type 1 diagnosis, the team took inspiration from superheroes. Discovering their powers they realise that life will never be the same again and that adaption to change is necessary. ‘Type 1: Origins’ is the first diabetes-inspired comic book and, since October 2016, has been downloaded for free nearly 6,000 times. All the key UK Diabetes charities have supported this initiative and the collaboration work continues, with Digibete UK animating the comic and funding secured to develop a comic sequel.

Sometimes, the written or spoken word on its own is not enough. A number of people with type 1 diabetes are very vocal about their frustration in trying to explain the difference between type 1 and type 2 diabetes and challenge ignorance. We wanted to create a new colourful educational resource for younger people: a first in diabetes, we wanted to visually depict an everyday person developing type 1 diabetes, someone that others could relate to. We were keen to use the medium of comic books, with the analogy of developing type 1 diabetes likened to that of acquiring new superhero abilities. Both situations require acceptance and adaptation to a change in circumstances. Superheroes are well established in popular culture and are often popular among children and young adults. The idea was to inform and educate readers, present some of the challenges while entertaining, but not making light of, a serious disease.

Work began in January 2016, when the collaborative group was created comprising clinicians, people with type 1 diabetes and Revolve comics. The aim was to utilise a pool of people with Type 1 diabetes whose personal stories varied, so a common thread could be created that would resonate with a large young audience. The result was to create the story based around ‘Gary’, a regular teenager who developed type 1 diabetes. The story and art was tailored to maximise engagement and with that optimise the amount of valuable information conveyed. Total development time was approximately six months, the majority of that being working with the group to shape the story, directed by the clinicians, but mostly by the people with diabetes themselves. The art was created with the target age group in mind. Many fun and visual reference and pop culture icons were used as an homage to increase effectiveness and engagement, as well as visual appeal. The comic was released in October 2016, free-to-download internationally. It was marketed widely with help from all the major UK diabetes charities (Diabetes UK, JDRF and the Diabetes Research and Wellness Foundation), who lent their support early and readily. National paediatric diabetes networks also helped with marketing. Local TV, radio and newspaper coverage also supported our efforts. The means to leave feedback online was also built in to the Revolve comics website.

The fact that we secured almost 6,000 international downloads in a relatively short space of time suggested to us that there was appetite for a new diabetes informative resource such as this. For us, there were several measures that suggested effectiveness. The key marker of this was in the direct feedback we received from both public and people with type 1 diabetes. The fact that leading diabetes charities continue to market the comic on our behalf, with one of them publishing excerpts from it in their patient newsletter suggested to us that this novel approach to type 1 diabetes education is valued. Another marker of efficiency is that we were approached by DigiBete UK. It offered to fully fund and arrange animation of the comic, which was launched in April 2017. There is also a push led by diabetestimes.co.uk to encourage UK secondary schools to show this cartoon to raise type 1 diabetes awareness. This new resource is free to download for all and hence no additional costs are incurred to anyone else. The project development was self-contained financially, through a combination of personal clinician and hospital charity- based funding. Clinician support was provided in their own time.

The comic book resource is complete and will not need updating. For no additional cost to the project team, Digibete UK have animated the comic, covering all costs. This animated resource is also free for all to download for use. Funding has also been secured for the comic development team to develop a sequel. Given that this comic book depiction of developing type 1 diabetes is freely available for all, there is no need to reproduce it elsewhere. For those who have found it helpful, it is hoped that they will share it where relevant. There is no reason why a similar comic book approach could not be taken to highlight other medical conditions affecting the young. 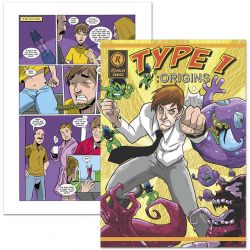