The UK has over 500,000 people from Black, Asian and Minority Ethnic (BAME) communities living with diabetes, and a greater number at risk of developing it. When information, education or advice is culturally focused, outcomes for people with diabetes in BAME communities improve. BAME communities in North West London (NWL) wanted dietary information relating to food they recognised and advice in a format they could easily understand, but this information was not available. A collaboration was formed between Carbs & Cals and NWL Diabetes Sustainability and Transformation Plan (STP) to create a book for education and self-management in BAME communities.

Dietary advice is important in enabling people to self-manage diabetes, but culturally-specific and relevant resources for BAME communities are limited. World Foods is the first comprehensive, visual guide to African, Arabic, Caribbean and South Asian foods. HCPs often lack knowledge on foods that are not from their own culture, resulting in poor communication with patients, and under-reporting of foods eaten. The book can be used by people with diabetes and their families, and also in clinic to facilitate effective conversations. Accurate nutritional information for foods from BAME communities is not readily available, so recipes were obtained from restaurants, caterers and local families in NWL. These were analysed and the nutritional values for each dish calculated. As the health literacy levels of the target group can be low, messaging in the book was kept simple, pictorial and culturally specific. This format ensures all information is practical and easy to implement, even with literacy and language barriers. Patients can recognise foods they eat, judge portion sizes and see possible effects on blood glucose levels, without having to read. Many people are not aware which foods contain carbs, or how these impact blood glucose levels. After much research and real-life testing, the carbs in each food portion in the book are presented using ‘blood glucose icons’, so patients visually understand the link between food they consume and blood glucose levels. The World Foods book was developed in Brent, NWL. This area has over 25,000 people with diabetes (and an almost equal number at risk of developing the condition), where ethnic minority groups form the majority of the population and have a higher prevalence of diabetes than the London average. The project was led by diabetes experts and is supported by Diabetes UK.

First, a list was of foods commonly consumed in African, Arabic, Caribbean and South Asian communities in the UK was prepared, using extensive community engagement. A page layout was researched and designed and mock-ups were tested using visual online surveys (nationally) with HCPs and people with diabetes. Authentic foods were sourced for photoshoots, each photographed in three portion sizes, weighed out by a registered dietitian and HCP. Nutritional values were researched for all foods, using recipes from families, restaurants and caterers, product packaging and credible databases. The introduction was written to be relevant to BAME groups, reviewed by independent diabetes specialist dietitians and presented as simply and visually as possible. A test book was produced to gather feedback from HCPs and patients in clinic, specialist professional groups and conferences. The ‘blood glucose icon’ system tested successfully and was used in the final resource. The final book had an introduction, separate food sections for the four communities and a generic section of foods common across communities. The Carbs & Cals team ensured a high level of attention to detail, ensuring all images and data were presented accurately. Several HCPs, people with diabetes and others checked the final proof.

In total, 10,000 copies were printed and World Foods was launched at the Diabetes UK conference in March 2019, with a one-hour presentation by the authors. In the first three months 3,000 copies sold, with a further 3,500 disseminated throughout NWL CCGs. It is being used nationwide and recommended by HCPs, including educators in DAFNE and DESMOND structured education programmes. A National Diabetes Prevention Programme provider has announced that it will soon be using the book as one of its key resources. There has been interest from HCPs and academics abroad to collaborate on projects and research on the book’s impact. HCPs and BAME communities now have a resource that was not available previously. Patients are more engaged, enhancing discussions and saving time in clinic and public health sessions. HCPs are educated on foods they were not familiar with, improving confidence. They can have more accurate discussions about typical food intake as patients can indicate portion sizes to HCPs using images. Patients have an effective, easy-to-understand resource to familiarise themselves with carb content, the effect of traditional foods on blood glucose, and a portion size guide that they can use at home.

Carbs & Cals has published books for nine years and is committed to publishing in the long term. World Foods is now a self-funding project, meaning sales income can be used to repackage and develop content for further use and resources. In the UK, this means: flashcards and posters to support education courses; books translated into local languages (e.g. Hindi, Urdu, Tamil, Arabic); a recipe book with healthy versions of traditional cultural foods, plus potential to be used in NDPP, DAFNE, DESMOND, X-PERT and other structured education courses for BAME communities. The book is already being used overseas and the Baqai Institute of Diabetology & Endocrinology in Pakistan is planning a study on how it can improve compliance and behaviour change; it is hoped to license book rights for publication in other countries. Other digital diabetes education programmes could use World Foods photos and data. 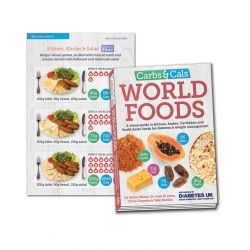