Wrexham Young Adult Diabetes Service – Getting Our Heads around Diabetes

The Wrexham young adult diabetes service aims to provide the best possible quality of care to young adults living with diabetes in North East Wales. Building on previous success in developing innovative models of transition, the team began an 18-month pilot project to make effective use of temporary clinical psychology provision for the service. Aware that young adults are often challenging, high-risk and difficult to engage, the service adopted a fully-integrated model for psychologist involvement. It actively sought individuals experiencing psychological distress via in-clinic screening. Staff and service user surveys indicated that the project was well received, and emergency care admissions reduced. By treating emotional and physical wellbeing equally, young adults can be better supported to live well with diabetes, in turn reducing demand on services.

In contrast to most adult diabetes psychology services across the UK, the team adopted a fully integrated approach, placing the psychologist as a core member of the young adult diabetes team, sitting in clinic with the consultant and the diabetes specialist nurse and contributing to all diabetes clinic appointments. The aim was to completely destigmatise any discussion about psychological issues and to reinforce the perception that the team weighted mental and physical health equally.

As the pilot progressed, a five-area service model was established, developing the psychologist’s role beyond the traditional core responsibilities of direct therapy work, which was offered on a rapid-access basis to individuals aged 18-30. A significant development was a psychological screening programme, where every young adult attending the diabetes clinic was asked to complete questionnaires on diabetes distress, depression and eating distress in the clinic waiting room. The outcomes of these questionnaires were then discussed in the young adult’s clinic appointment. The process was repeated at each subsequent clinic appointment, creating a holistic experience and recognising the significant impact of emotional wellbeing in diabetes management.

The pilot commenced in June 2016, with the psychologist sitting in on diabetes clinics from July 2016 onwards and being introduced to patients as a core member of the diabetes team. The screening programme used the Diabetes Distress Scale (DDS-17) and PHQ-9 and to measure symptoms of diabetes distress and depression. Paper questionnaires were completed by patients in the waiting room, and then analysed by the clinical psychologist at the start of each clinic appointment, so that the results could be shared with the team and discussed. Screening results were stored on a database that the psychologist accessed during the clinic, enabling comparisons with the patient’s previous results. During the project 101 individuals were screened for depression and diabetes distress. In the last six months of the project the team started to routinely screen individuals for eating distress using the Diabetes Eating Problem Survey (DEPS-R), and data was collected for 38 individuals. In the final months of the project, the team analysed diabetic ketoacidosis (DKA) admissions data over the previous seven years to establish effects on unscheduled care usage. Data based on clinical coding was retrieved by the hospital health informatics department and analysed by the clinical psychologist.

The in-clinic screening programme identified significant levels of unmet psychological need within the population; of the 101 individuals screened, only two had accessed generic adult mental health services. During the pilot project 44 individuals (44% of the total clinic population) were referred to the psychologist for direct therapy work, the vast majority of whom would not have been able to access alternative psychological support. The most significant and common unscheduled care event for young adults with Type 1 diabetes is an emergency admission with DKA. Analysis of the hospital DKA admissions data collected over seven years indicated that admissions in the 18-30 age group had been decreasing since 2012/2013, coinciding with the introduction of improved transition processes in 2012. This trend continued during the 2016/17 period of the pilot project, where the average number of DKA admissions was 45% lower than the previous five-year average. During the pilot, the clinical psychologist received 56 referrals for 44 individuals; five individuals were re-referred following prior disengagement or therapy completion and subsequently re-engaged in therapy. Two were re-referred on multiple occasions due to chronic disengagement and high risk/distress. Most referrals (93%) were accepted, and 88% of assessment appointments were attended. The mean number of sessions offered was 4.5 (range 1-23), and the average attendance rate for therapy sessions was 79%.

The pilot project results were presented in a poster at the ABCD Autumn conference in 2018, and in an oral presentation at the Division of Clinical Psychology national conference in 2018. The service was selected as a model of best practice for psychological care in young adult diabetes services in two national documents, the ‘All-Wales Standard for People With Diabetes Moving From Paediatric to Adult Services within NHS Wales’ (NHS Wales, 2017), and the Diabetes UK guide ‘How To... Improve Transition for Young People with Diabetes’ (Diabetes UK, 2017). The results of the pilot project formed the basis for a business case to secure permanent clinical psychology input in to the young adult diabetes service. As a result, the Wrexham Young Adult service now has a clinical psychologist with a permanent specialist post in the team. A business case to secure similar posts in the other diabetes services across the health board has been submitted. 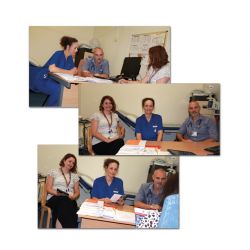