Patient reference group for the cancer centre at Guy’s

A Patient Reference Group was established to work alongside clinicians and managers to develop the plans for a new cancer centre at the hospital, which will open its doors to the public in 2016. This group was set up to ensure that patients’ voices were heard and members were involved in the shortlisting and appointment of the architecture and construction firms, as well as being active participants in the development of the design for the building.

The Patient Reference Group is chaired by a former cancer patient and meets bimonthly to discuss the latest developments of the building and to hear directly from and be consulted by staff representatives. This often takes the form of a clinical lead presenting to the group and asking for its advice and feedback on a particular aspect of the plans, from the layout of the rooms to the way in which patients will be greeted in the building.

A new Cancer Centre at Guy's Hospital will open in 2016. One of the key tenets driving the development of cancer services there is to be patient-centred. Establishing patient involvement in the development of the centre was considered core to the project.

A Patient Reference Group was established In February 2010 to work alongside clinicians and managers to develop the plans for the Cancer Centre.

In May 2013, following the sign-off of the full business case for the new Centre by the Trust Board, the group was re-launched and its membership extended. Its new purpose is to work alongside staff and external partners to develop the full plans for the Cancer Centre and to provide a patient perspective.

The Patient Reference Group was set up to ensure that patients’ voices were heard and duly incorporated into the design of the building.

Patients were active participants in meeting with prospective architect firms. At one meeting, a patient mentioned how demoralising it is to return to a basement each time for radiotherapy. As a result, the winning architecture firm placed radiotherapy on the second floor – the first such design in Europe.

Patients also participate in regular ‘Challenge Sessions’, meetings in which staff report back on the progress they are making in their plans and preparations for the Cancer Centre.

The Group is also leading on the patient-centred care workstream, focusing on communication with patients and visitors and patient education. 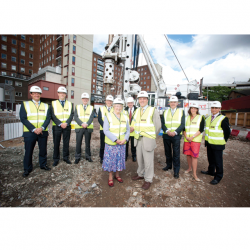